A huge thank you to Brymore Academy for their excellent hosting of the Sedgemoor Area Cross Country 8th December. The course was a new challenge to the runners and it was an enjoyable meet. 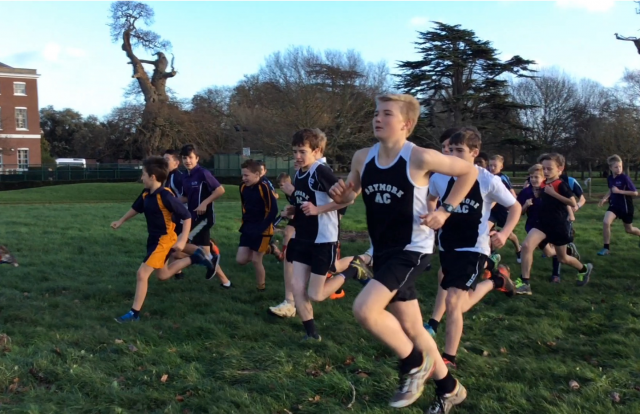 Teachers from across Sedgemoor came together at Canalside today for a networking session followed by an introduction to Real PE. The networking session covered the use of Primary PE premium and the appropriate uses of this funding, inclusion in PE, resources available to support this including Mel Bax from Haygrove which is the "Project Ability" school for Somerset. We also covered Change4life clubs and how to get support to make them sustainable. Should you require any further information on this or any other CPD related question please contact nmurdoch@sasp.co.uk or tsmyth@sasp.co.uk.

120 children from Enmore, St Josephs and Westover Green took part in a year 3 invasion Games festival, this is part of the curriculum festival programme. The leaders from Haygrove did an excellent job of introducing practices and developing skill among the school children. They then had the opportunity to play adapted versions of invasion games sports (Basketball, Netball, Hockey and Rugby)

As part of the Buy-in offer for schools, a year 2 Multi Skills festival was held at North Petherton Community School for 120 children from North Petherton, North Newton and Berrow primary schools. The children challenged themselves to try new activities and develop consistency in other skills. We were supported by leaders from Shapwick school, and they did a fantastic job of delivering interesting and adapted skills and drills with loads of encouragement and energy. Thank you to everyone for making a really fantastic festival.

The first 2 Curriculum Festivals were held at Haygrove School and Robert Blake Science College. Over 300 children from Sedgemoor schools took part in curriculum based festivals that develop PE skills. The children were taken through the activities by Leaders from Haygrove School, Robert Blake Science College and Elmwood School. The leaders made the activities exciting and fun and awarded stickers to the children who were able to demonstrate key learning outcomes in the activities. 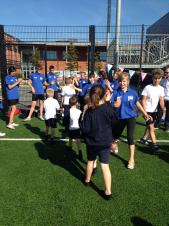 16 teams took part in Primary Boccia at Robert Blake Science College, leaders officiated from Elmwood School and Brymore Academy a big thank you to them for an excellent job, well done.

Over 300 children took part in Sedgemoor Sportshall Athletics at Bridgwater College, with over 30 college leaders doing a fantastic job of officiating and helping to make the competition run smoothly. In the primary competition St Joseph's BOS and St Andrews schools both qualified for the Somerset Level 3 School Games, in the Secondary competition Robert Blake Science College qualified in year 7&8 boys and year 7 girls competition and The King Alfred School qualified in year 8 girls. It was a high energy day with loads of excitement.

In early December a Schools Swim Gala was held at Chilton Trinity Swimming pool, with 1610 and Bridgwater Swim Club supporting the event. 13 schools took part over 3 events. Fantastic to see the team support and excellent swimming. They were great events.

The 2nd Cross Country was held with many thanks to Burnham Sports Association for letting us use their facilities. Well done to the 285 runners! Please see the results below

The first of this year's Cross Country races took place at North Petherton Rugby Club 23rd September. Approximately 300 runners from primary schools all over Sedgemoor, from years 3-6. There were lots of parents there to support and it was a really fantastic atmosphere. Well done to all those who took part, it was a real achievement!

A Blustery day for the Large School Sedgemoor Football Final. 6 teams played with lots of really close games. St Joseph's Burnham on Sea won with St Mary's Bridgwater second and both will progress to The Somerset Finals in January. 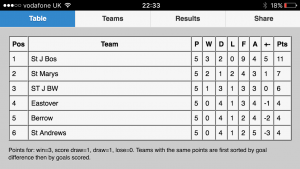 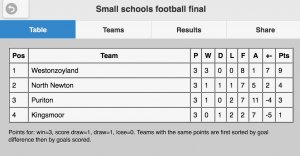 A great final was played on Monday 23rd November. Close matches with Westonzoyland finishing top and North Newton second, and they will both qualify for the ESFA Somerset Football Finals in January. Special thanks to Robert Blake Science College for the excellent leaders and referees that have worked with us all season.

The Girls Football Final was a great competiton with some fantastic skills and team work shown. Berrow finished top and Brent Knoll second and both teams qualify for the ESFA Somerset Schools Finals in January. Thanks again to Robert Blake Science College for their great leaders once again. 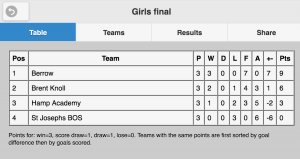 Large School Pool B took place at Robert Blake Science College with 5 teams. There were some really close matches and there was some excellent play. Once again students from Robert Blake were on hand to referee and to support the running of the competition. 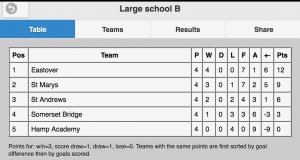 A great turn out of 6 teams for today's competiton, lots for great teamswork and encouragement from the teams. Some really close games throughout the tournament. thank you to Robert Blake Science College for the leaders. 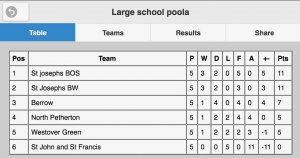 Great competiton again from the Small schools, great teamwork and commitment from all the school. Thank you to Robert Blake Science College for providing leaders and referees. 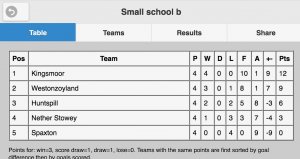 It was a little wet for this week's football, but that didn't dampen the play. There was lots for great team work and "play making". Some great goals and fast paced play was played by all the teams. Thank you to the referees, volunteteering from Robert Blake Science College. 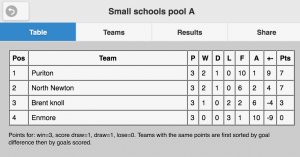 Berrow School and St Joseph's Burnham on Sea qualified for, the Sedgemoor area Girls football final 16th November. There was some really great play, the girls hard 4 matches in their pool and there were lots of really close matches. The competition was supported by 4 leaders from Robert Blake Science College and they did a great job. 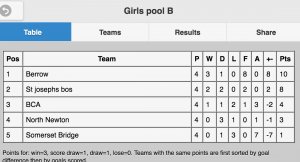 Brent Knoll and Hamp School qualified for, the Sedgemoor area Girls football final 16th November. All the girls worked hard in their matches, and had a great time. The referees and Tournamnent officials from Robert Blake Science College did an excellent job. 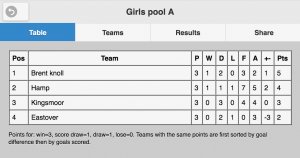 6 teams took part in the 1st football competition of the year. 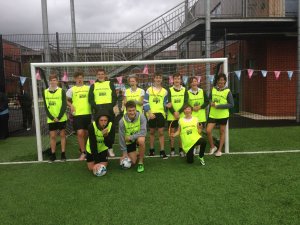