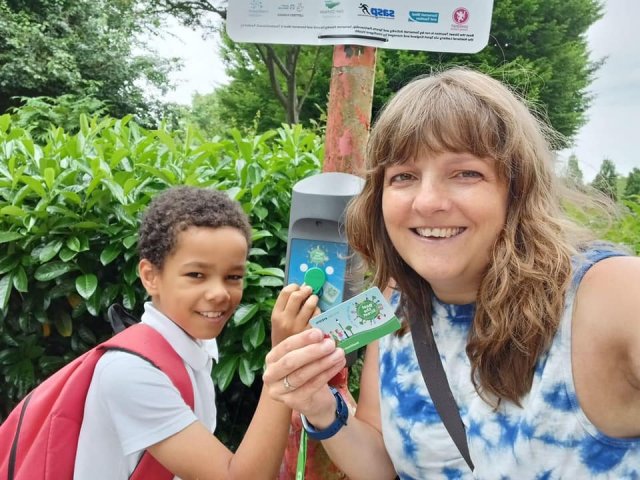 More than five thousand parents, teachers and children have signed up to a new physical activity challenge, 'Beat the Street', travelling more than sixty-two thousand miles between them.

The giant game, which has swept the streets of Taunton in the last month, is being run by Somerset County Council, Somerset Activity and Sports Partnership (SASP) and Somerset West and Taunton Council, funded by the National Lottery via Sport England and managed by Intelligent Health.

Beat the Street, which ran from 16 June until 14 July, encouraged people to get outside and get active and was open to anyone of any age who wanted to take part.

The competition turned the town into a real-life game with special sensors called Beat Boxes on lampposts around the area. Players walked, ran, scooted, wheeled, or cycled between the thirty-one Beat Boxes which were spaced half a mile apart – tapping a special fob or card as they went. The further players travelled, the more points they scored.

The challenge was created by Dr William Bird, a GP working on the NHS frontline against Covid-19. It was low-risk, contactless and easy to play whilst maintaining social distancing:

Prior to the game, primary school pupils from participating schools were provided with fobs while parents and teachers received a card from the school so they can accompany children.

On the last day of the game, On Your Bike, Taunton Area Cycling Campaign, Avon and Somerset Police and SASP, brought the people of Taunton an afternoon of cycling awareness and safety, with Dr Bike on hand to check peoples bikes were road worthy and safe.

Beat the Street was an ideal opportunity to make a small lifestyle change that could have a huge impact on your health and wellbeing.

Councillor Clare Paul, Somerset County Council's Cabinet Member with responsibility for Public Health and Wellbeing, explained: "It has been a tough year for us all, but for many it has been a time to reflect and look at ways to improve their quality of life. Coronavirus has brought it home to us all, how important it is to make changes to improve our health and fitness levels.

"This exciting joint initiative was a fun way to take small steps towards a healthier future. I do hope it has inspired many people to continue with those changes beyond the Beat the Street game."

Dan Tremain, SASP Project Officer said, "Beat the Street Taunton has been a massive success! We are thrilled that over 5000 people have taken part in this initiative, and we hope this activity continues after the game. It has been so lovely to see families out together in the evenings and at weekends collecting their points and also people thinking differently about how they travel to work".

"We would also like to thank the organisations from across the town who were distribution points for the cards and maps, for being so engaged and enthusiastic with this project".